For the fourth time in six years, SABIC has received an award from the European Polycarbonate Sheet Extruders (EPSE) – this time for SABIC’s optical bright LEXAN SG305OB sheet panels used for the distinguished 1600 m2 façades of the new Caixaforum, a cultural and social center of Zaragoza in Spain, designed by Catalan architect Carme Pinós. Thanks to its unique structure, the building appears as a sculptural element amidst the park and SABIC’s translucent LEXAN SG305OB sheet plays a key role in illuminating lighted organic drawings at night to create a unique atmosphere on the façades of the building. The acknowledgment of the LEXAN sheet’s pivotal role in the project by EPSE is further evidence of SABIC’s continued success in enabling sustainable designs in the building and construction industry.

“It’s a great honor to be named the 2015 EPSE Award winner for the Design category. This award is a tremendous testament to our commitment to the architectural industry – which, to us, means listening to our customers and leveraging our expertise in response to their needs,” said Michel van Acht, General Manager of Specialty Film & Sheet EMEA region at SABIC. “For more than four decades, LEXAN sheet products have been helping architects and designers create awe-inspiring buildings that meet strict requirements for performance and safety.”

Through her project for CaixaForum Zaragoza, Carme Pinós created a building, which allows visitors to experience being part of the city. The design splits the building into two large geometric structures that house the exhibition halls, creating a new public space on the ground floor that connects the station with El Portillo city center. The translucent outside skin of the building is covered with 1,600 perforated aluminum panels backed with LEXAN SG305OB sheets. SABIC’s polycarbonate sheet materials are cut into different shapes to follow the drawings on each façade and accommodate LED lights providing the bluish lighting. The building is visible from all sides of the park, creating the illusion of being an extension of the city. At night, you can see illuminated organic drawings on the façades obtained by perforating the plate and using LEXAN SG305OB sheets as the light diffuser. This technique creates two different aesthetics, one during the day and another at night.

LEXAN™ SG305OB sheet was the material of choice due to its uniform illumination with superior optical brightness for eye-catching displays as well as its excellent fire safety behavior with B-s2-d0 rating according to European EN13501-1 standard. LEXAN SG305OB sheet, unlike conventional sheet products, offers both uniform light diffusion to eliminate light emitting diode (LED) “pinholes” and a view of light sources, and superior light transmission for exceptional optical brightness at lower energy costs. In fact, the material boosts light transmission to more than 50% versus PMMA. It has a matte finish on its outward-facing surface to reduce reflections, provides excellent UV protection, and has renowned impact resistance. Established in 2007, the EPSE Awards recognize the best and most innovative applications made with polycarbonate technology. The EPSE Awards is an internal, biennial competition and the Awards 2015 is the seventh edition.

This honor marks SABIC’s fourth award from the EPSE for its LEXAN sheet. SABIC received the 2008 award for the Metro Station Carmes in Toulouse, France; 2010 award for its contribution to the Aviva stadium in Dublin and 2014 Award for the Grotte de la Salamandre Visitors’ Center in France. These honors represent SABIC’s ongoing effort to be an international leader in supporting inventive applications and sustainable building and construction materials.

• SABIC and brands marked with ™ are trademarks of SABIC or its subsidiaries or affiliates.
• High-resolution photos are available upon request.
• SABIC should be written in every instance in all uppercase.

Saudi Basic Industries Corporation (SABIC) ranks as the world’s third largest diversified chemical company. The company is among the world’s market leaders in the production of polyethylene, polypropylene and other advanced thermoplastics, glycols, methanol and agri-nutrients.

SABIC’s businesses are grouped into Chemicals, Polymers, Agri-Nutrients, Metals and Innovative Plastics. It has significant research resources with innovation hubs in five key geographies – USA, Europe, Middle East, South East Asia and North East Asia. The company operates in more than 50 countries across the world with around 40,000 employees worldwide.

SABIC manufactures on a global scale in Saudi Arabia, the Americas, Europe and Asia Pacific.

Headquartered in Riyadh, SABIC was founded in 1976 when the Saudi Arabian Government decided to use the hydrocarbon gases associated with its oil production as the principal feedstock for production of chemicals, polymers and fertilizers. The Saudi Arabian Government owns 70 percent of SABIC shares with the remaining 30 percent publicly traded on the Saudi stock exchange. 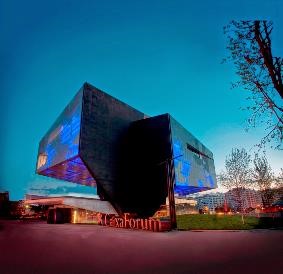 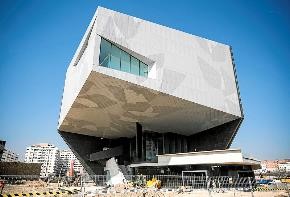 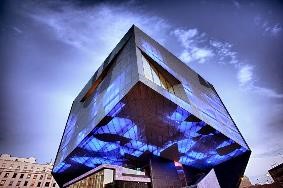 SABIC has received the EPSE Design Award for its optical bright LEXAN™ SG305OB sheet panels used for the distinguished 1600 m2 façades of the new Caixaforum, a cultural and social center of Zaragoza in Spain, designed by Catalan architect Carme Pinós.